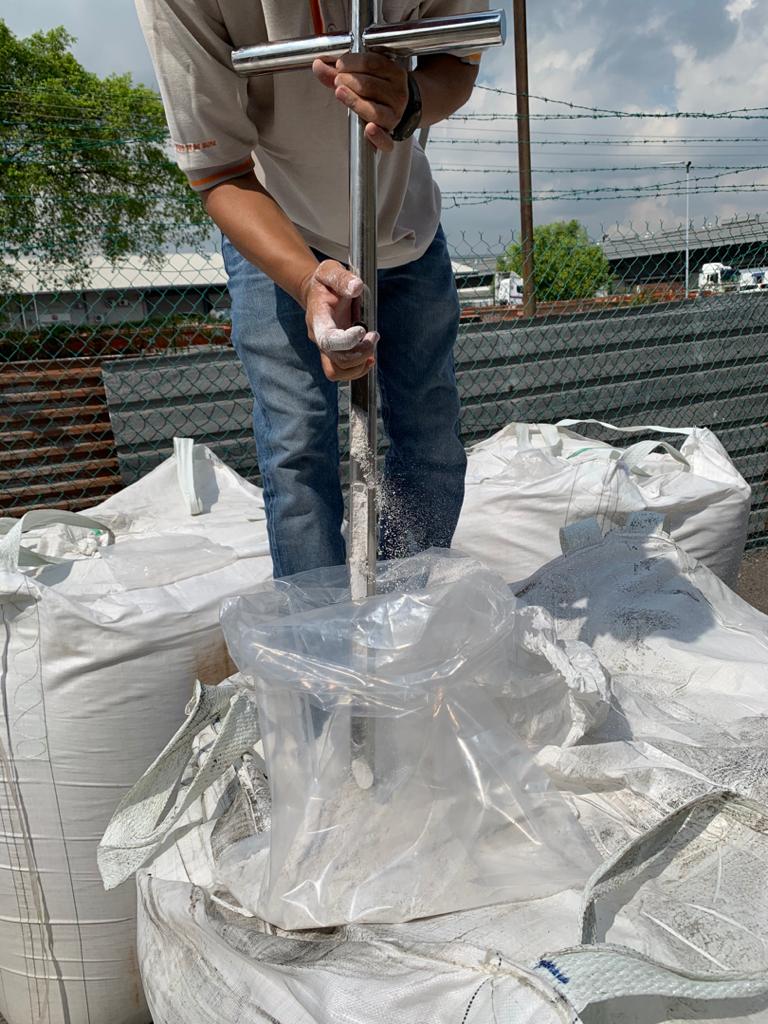 Unloading of Ulexite and collection of composite sample

Below are the activity by Everchem Corporation on the unloading of Ulexite and being inspected and composite sample collection exercise by SGS Malaysia. 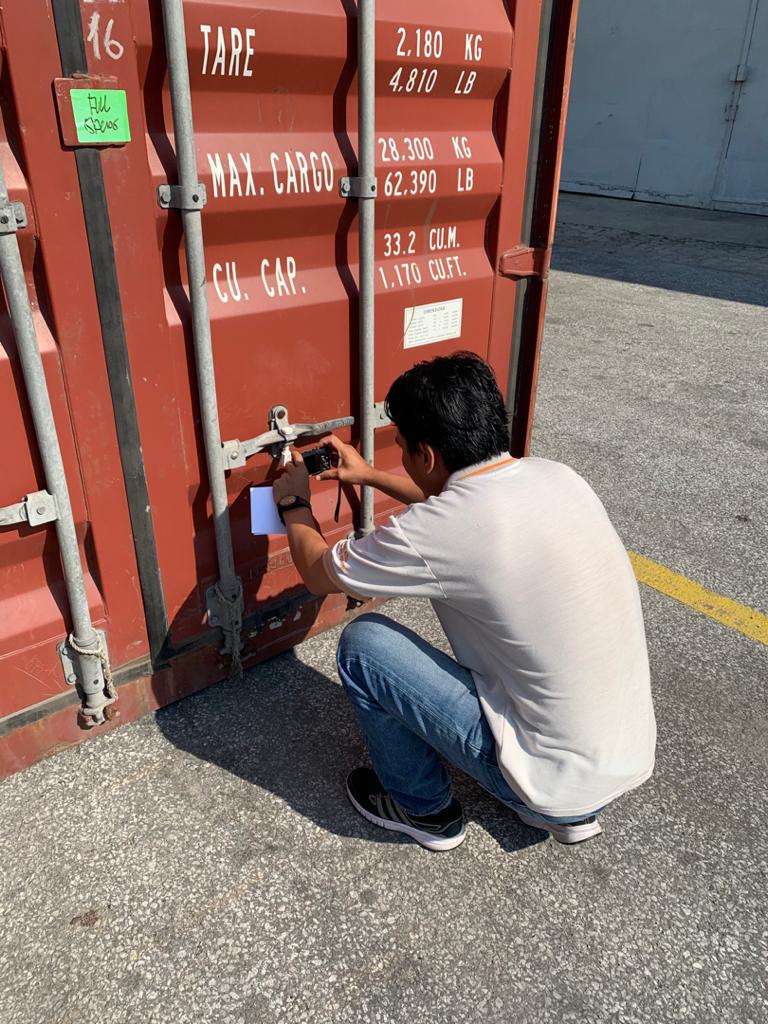 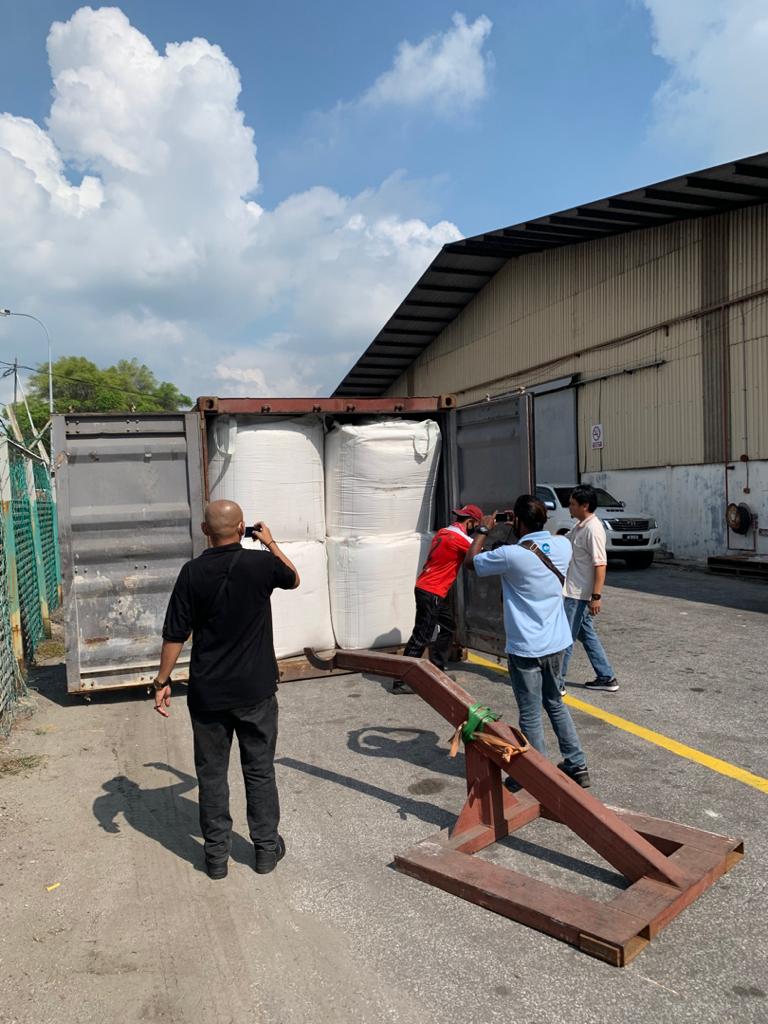 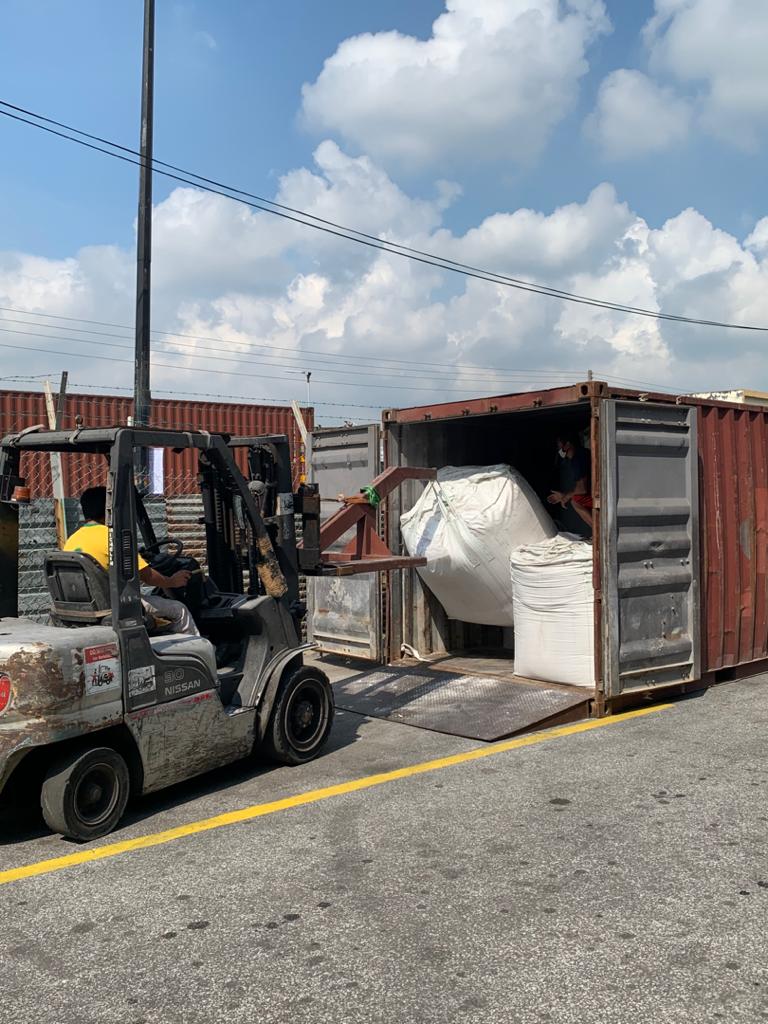 UNLOADING OF ULEXITE FROM THE CONTAINER 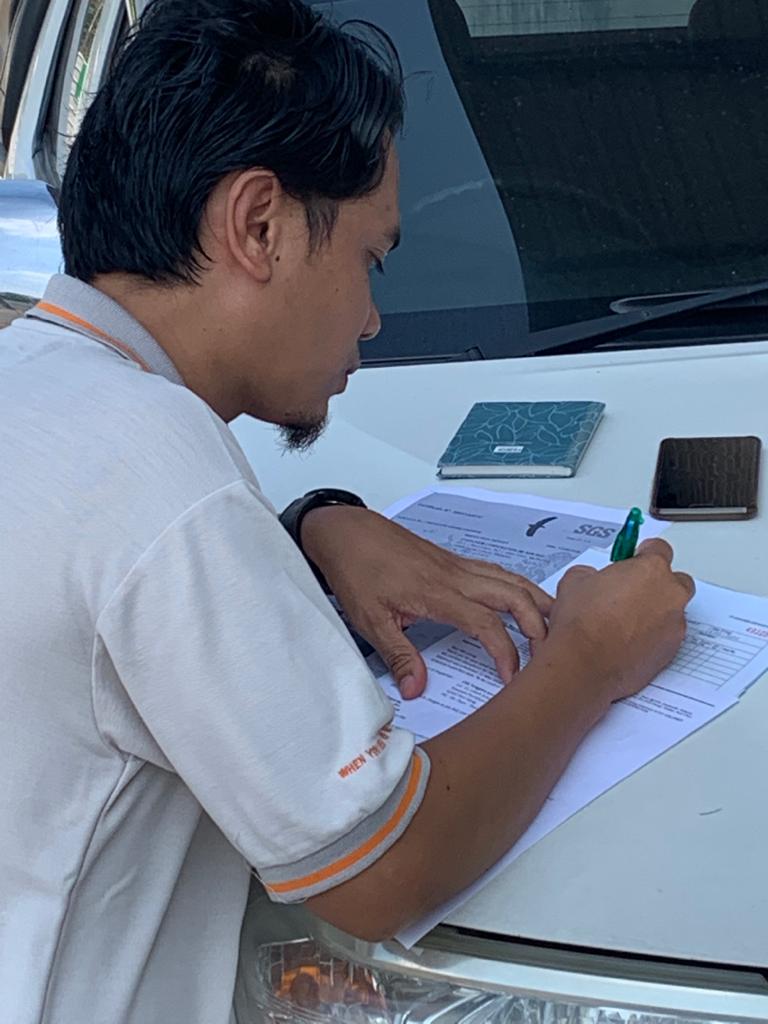 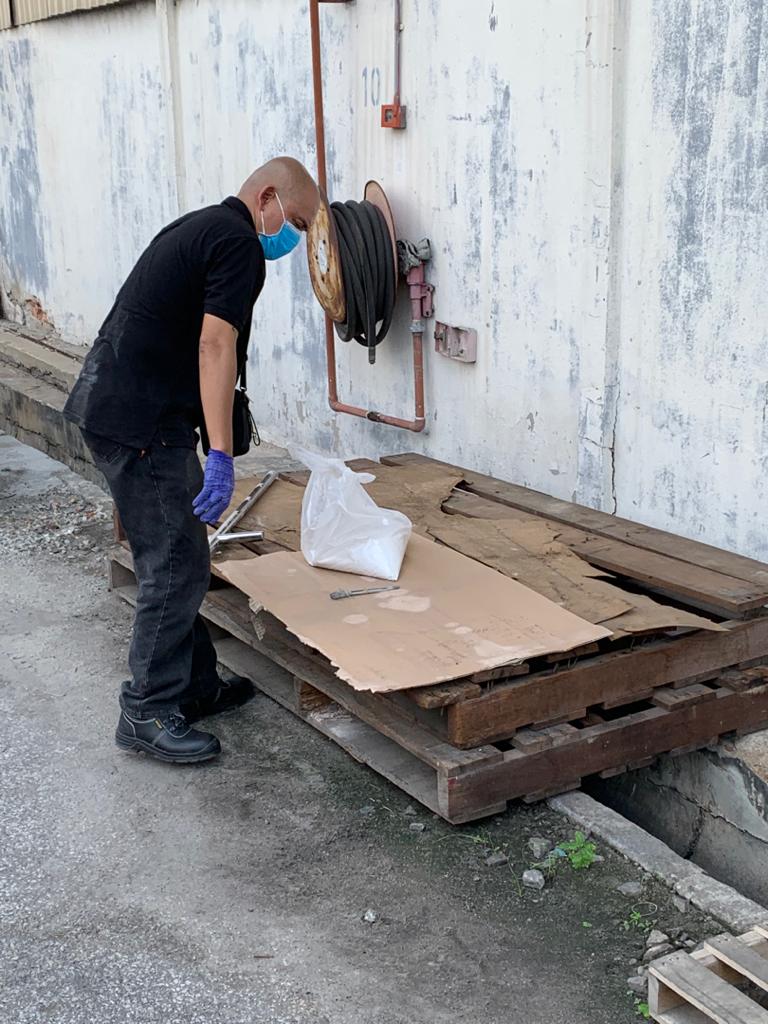 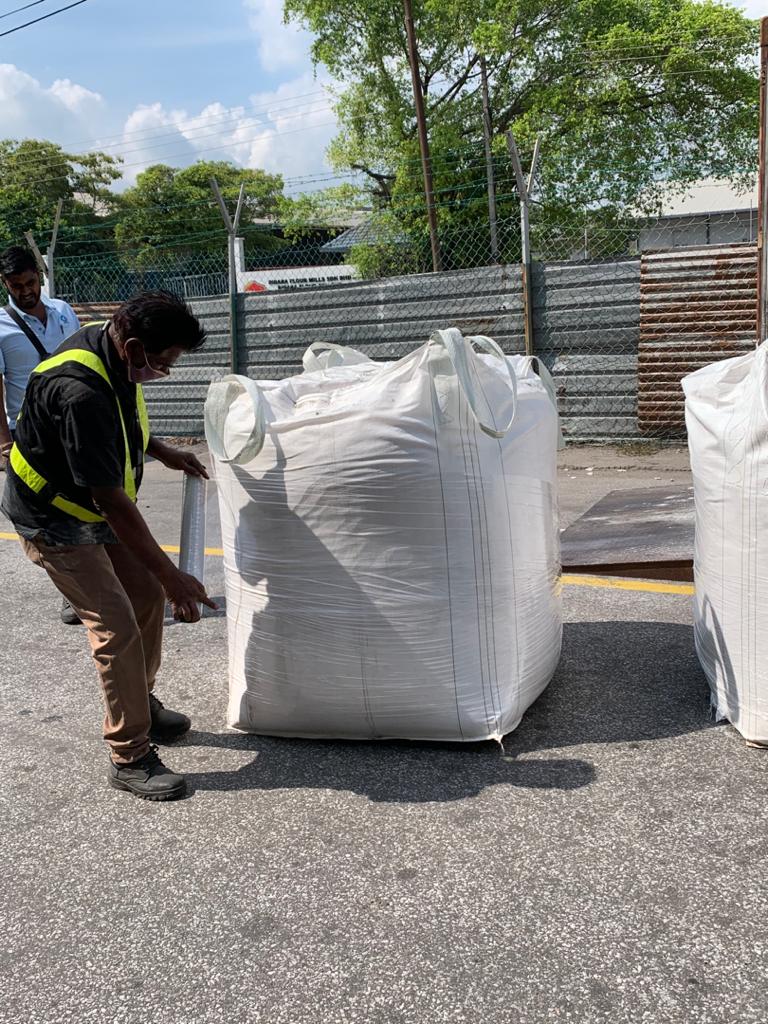 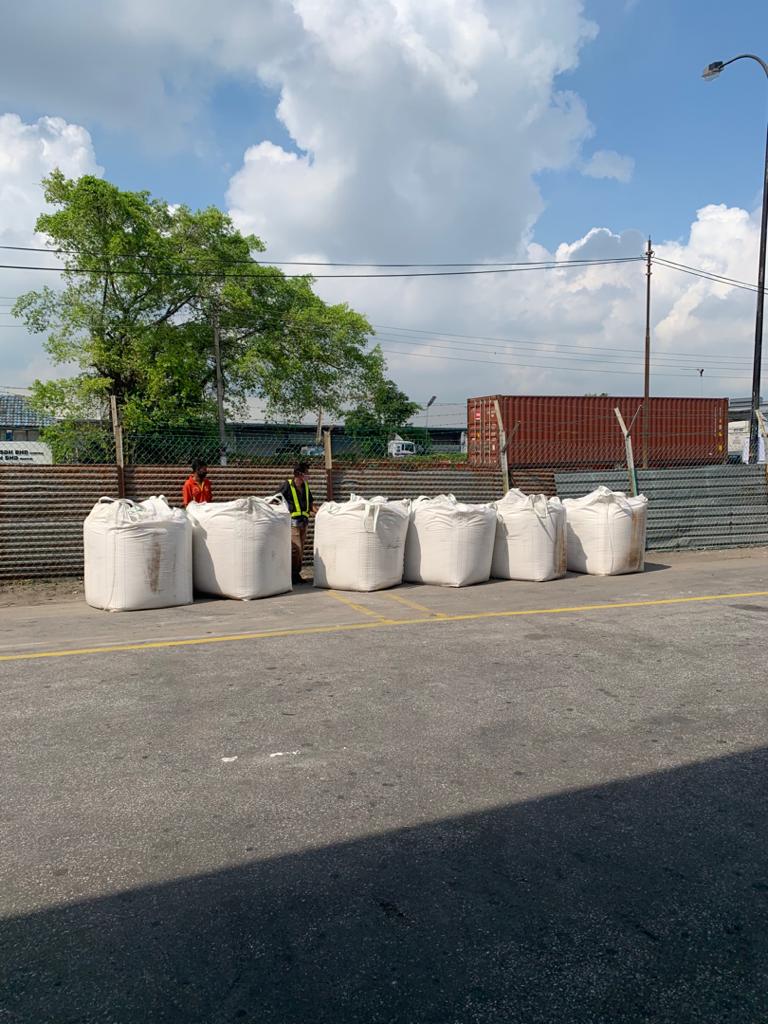 ARRIVAL OF THE CONTAINER

UNLOADING OF ULEXITE BAGS FROM THE CONTAINER 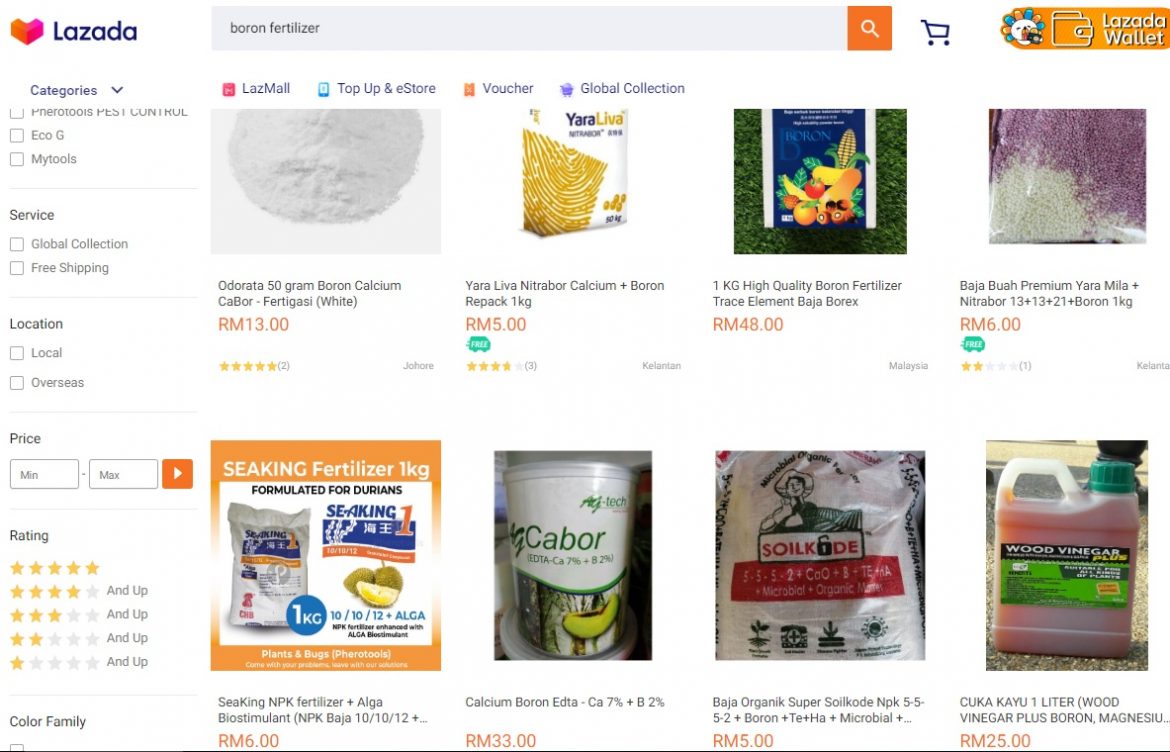 E-commerce in this day and age isn’t just limited to buying clothes or groceries online. You can basically find everything you need online, and have it delivered to your doorstep.

It’s no different for things like agricultural equipment and fertilizers. There are stores offer these things online nowadays so you don’t have to travel yourself and pick them up.

The purchasing process on these online supplier sites is also very quick and efficient. You don’t have to go through the time-consuming steps of getting quotations, issuing P.O.s or dealing with invoices anymore.

Just go online, state how many units you want and just pay through online bank transfers or credit cards. It’s so fast and easy. Here are some of the sites where you can find fertilizers for sale, especially ground Borate Fertilizers or Ulexite:

AliBaba mostly carries Ulexite Borate and Boron fertilizers from China. However, the availability largely depends on the manufacturers on the site. However, you will be able to see all the Borate fertilizers or pure Ulexite powder suppliers by typing in these search terms into the search bar above.

Most suppliers require you to buy a minimum amount in order for them to justify the shipping fees. So usually you won’t be able to buy one or two packs at one time and this is the only downside.

Lazada does carry some forms of Boron, such as Borax and not specifically Ulexite. However, the amount of Borax or Borate fertilizers you can buy on Lazada is pretty small. They are sold in packs or bottles of 1kg or less and are meant for gardeners and domestic use, rather than plantation owners.

Additionally, they are also sold as part of a mixed fertilizer formula rather than straight fertilizer. 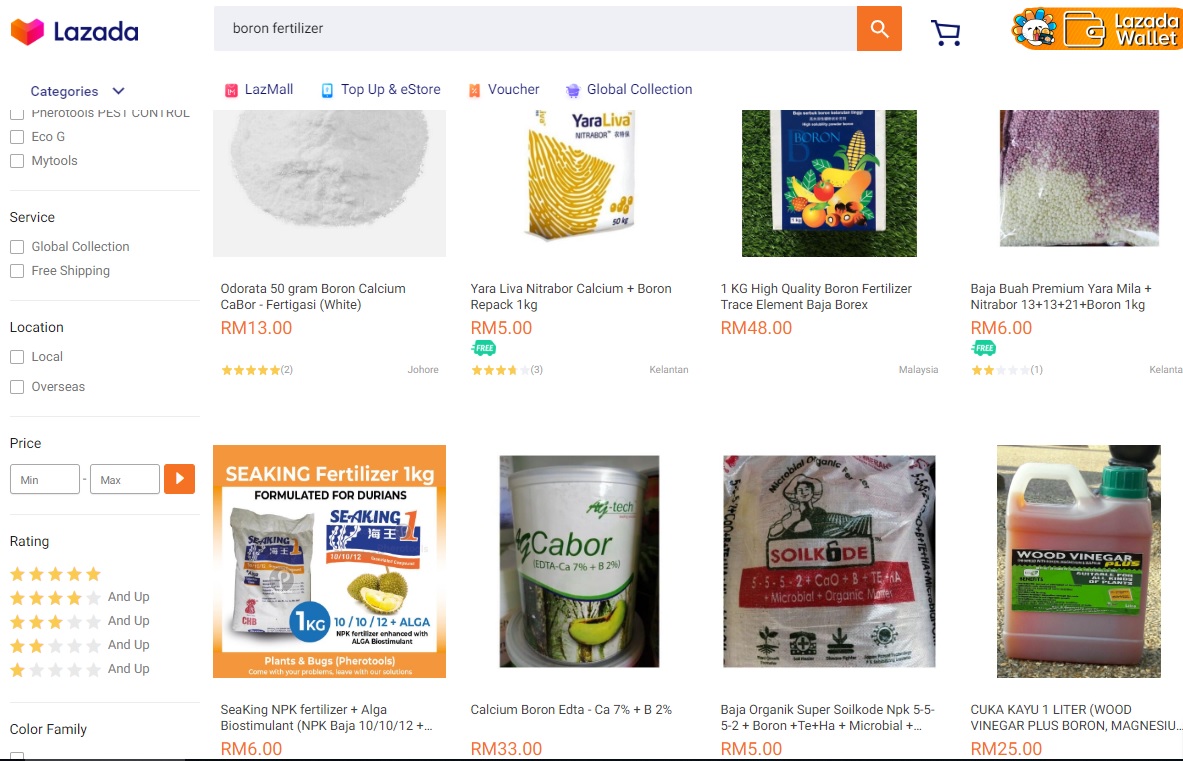 Ubuy has many lifestyle products, and here you can find sometimes find Borate and Boron as part of complex fertilizers designed for farming and cash crops. Most of the products at Ubuy are imported from the US and other foreign countries so you can be assured of the best quality products for your plants in the long run. If you’re here, you’ll want to use the keyword ‘fertilizer’ to begin your search.

Amazon carries Boron and Borate fertilizers from all over the world, and you can definitely find one in stock. Otherwise, there are plenty of micronutrient fertilizer mixtures you can also try. The only thing is that buying online from Amazon might be a tad bit more costly since all the prices are in USD.

For the time being Everchem does not do any direct retail trading towards the customers as most of our business is mainly on wholesale. However, should you require further information on the type of products that we carry feel free to drop an email to us at james@everchem.com.my. 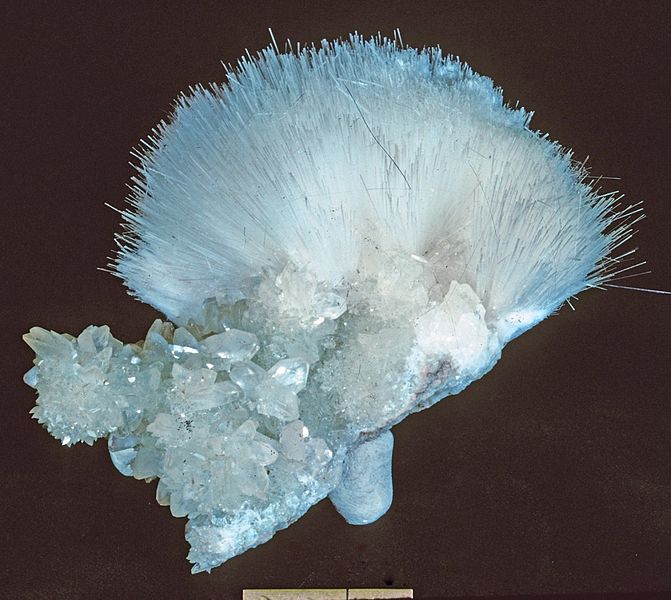 Granulated Ulexite: Where Does It Come From?

Ulexite is a source of Boron that’s commonly used in the chemical industry. Apart from being the main component of Boron fertilizers, Ulexite is also used in glazing, bleaching agents, glass production, flares and much more.

The mineral form of Ulexite usually takes on the appearance of a crystal mass that’s either clear or slightly cloudy. It can also appear as parallel fibers in certain instances.

Where is Ulexite mined in the world?

The mining of Ulexite, together with other Boron deposits, are regulated by the laws of each country. Thus far, Ulexite has been found mainly in Arid regions of countries like the U.S.A., Argentina, Chile, Russia, Peru, Serbia, Bolivia, and China. 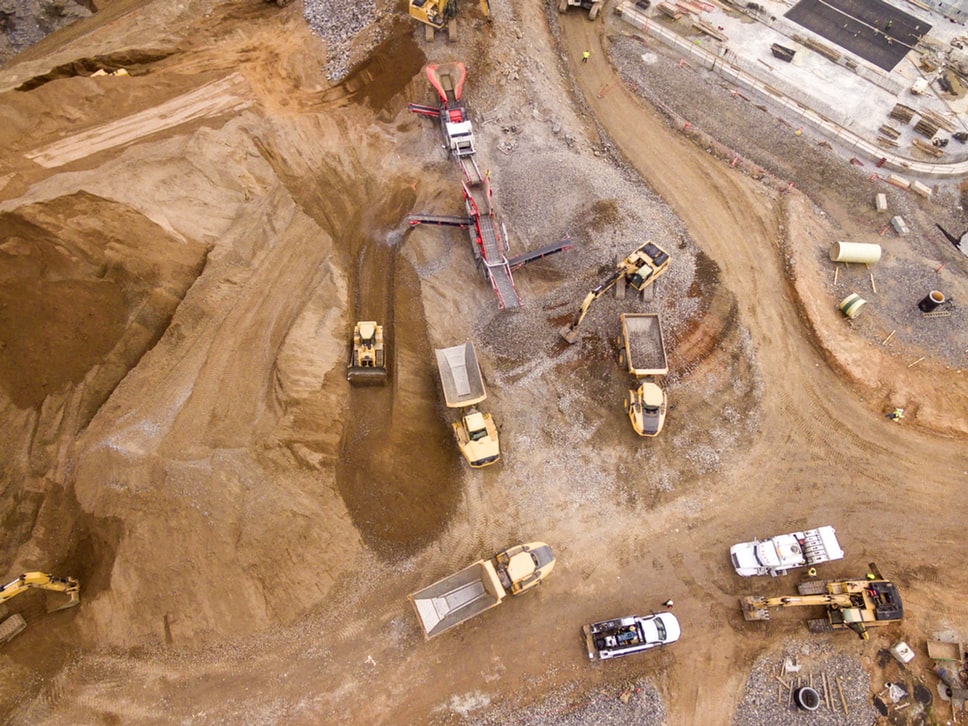 Ulexite is primarily found in Nevada and California in the U.S., as well as in the Tarapaca region of Chile and in Kazakhstan. Additionally, it is also mined in the Emet, Bigadiç and Kırka regions of Turkey where there’s a huge deposit of Boron.

Ulexite is a Natural Borate Product

The minerals that come from Boron mines can be processed into many different products. However, Ulexite does not need to undergo any more processing. It is usually taken straight from the mines and the rock deposits are cleaned off using a machine. 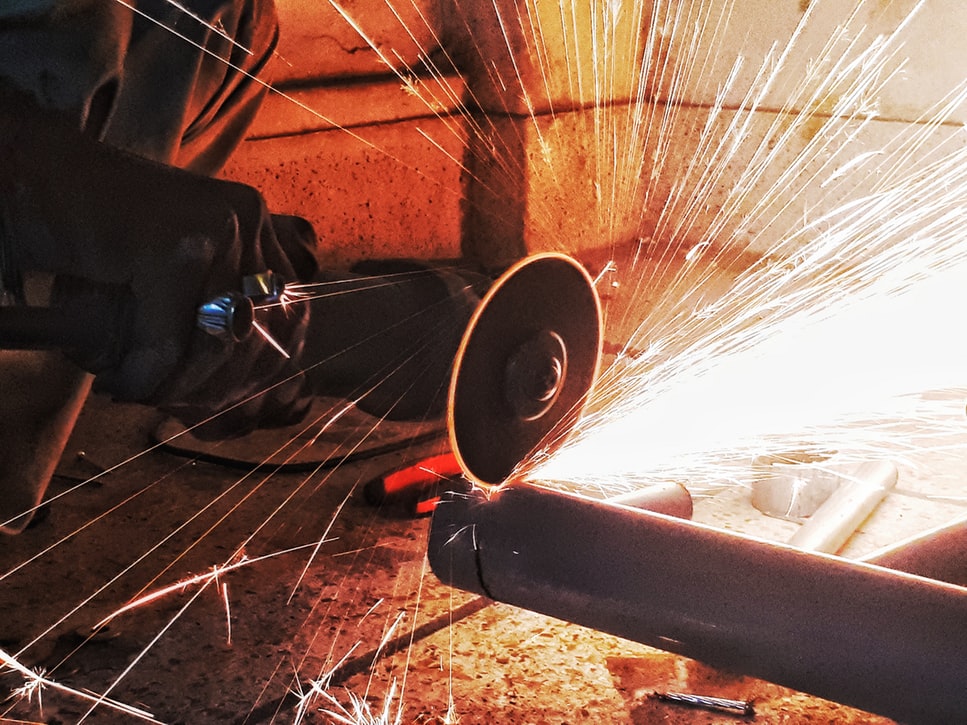 Larger deposits of Ulexite are cut into more manageable sizes before they are put through a grinder to be ground into a powder. Different companies provide ground Ulexite powder of different sizes.

For a standard agricultural application, Ulexite is usually ground to 2-4mm in size. This is considered the standard size.

Ulexite can also be ground into a finer powder less than 50 μm in diameter. When ground, Ulexite resembles a grayish white powder that is about 35% Boron Oxide (B2O3) and about 20% Calcium Oxide ( CaO).

The Future of Ulexite

Ulexite is, unfortunately, a mineral that is not renewable. This means that once all the Ulexite in the world has been mined, we cannot produce more. The countries with the highest Boron reserves right now are Turkey and Russia.

It is therefore important for Ulexite and Boron mineral producing countries to consider recycling Boron from various wastes in order to produce a viable Boron source for the industries that need it, including the agricultural industry. 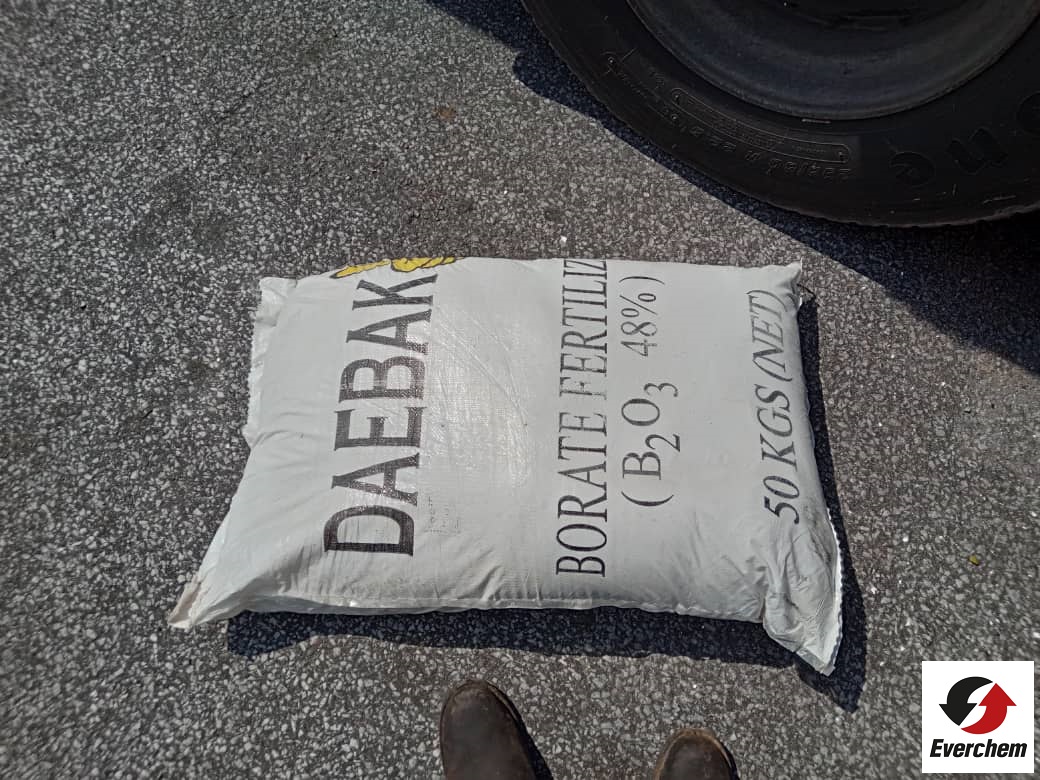 Boron is an essential micronutrient that every plant needs. It has a diverse application in the plant’s daily metabolic system. As such, it is essential to ensure that your crops get enough Boron on a regular basis.

Boron deficiency can cause plants to develop severe symptoms such as weak and inadequate roots, empty seeds and fewer flowers during the pollination stage.

Nature offers us many sources of Boron which can be turned into fertilizers. Most of these sources are mineral and are mined naturally, rather than synthesized in laboratories. Some natural sources of Boron used as fertilizers include Granubor, Hydroboracite, Colemanite, and Ulexite.

Ulexite is a white, grey or colorless mineral consisting of sodium-calcium and borate. It is named after a chemist called George Ludwig Ulex who first identified and analyzed this mineral in the 1800s.

Ulexite is most commonly found on lake beds, where they are purified from the surface. Ulexite is actually very popular among mineral collectors due to their fine, hair-like appearance and clear crystallized form. 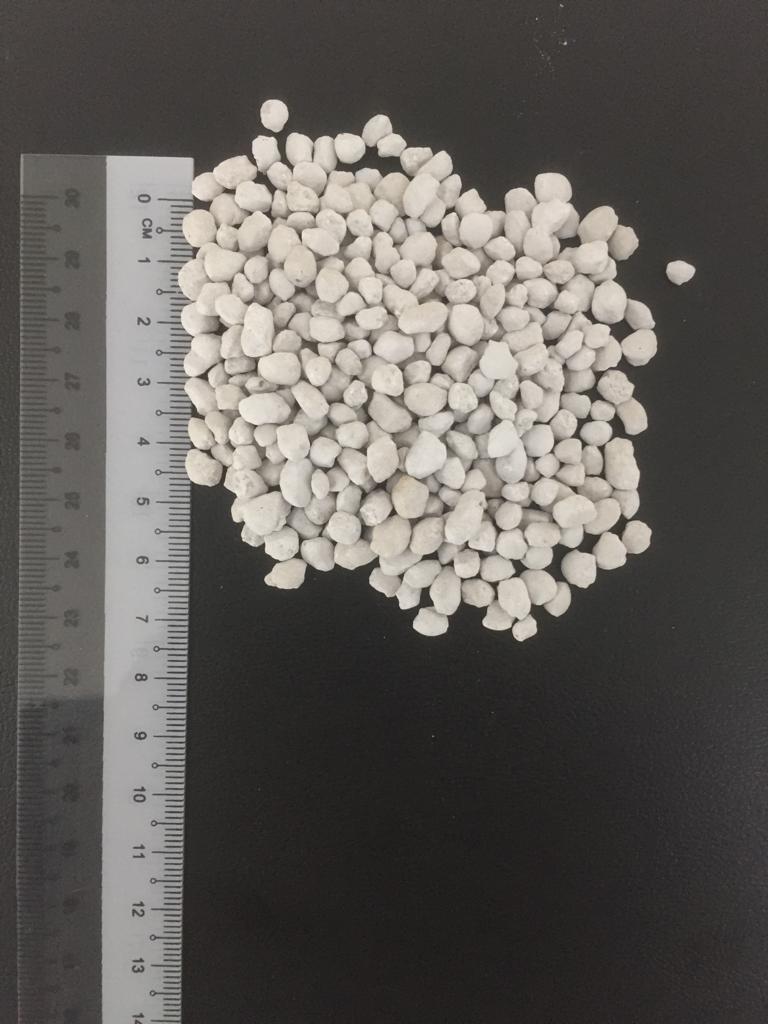 In the fertilizer industry, it is processed into a powder or granules and usually applied alone to plants.  Its proper chemical name would be Sodium Calcium Penta-borate Octahydrate. It is easily soluble in water and therefore very suitable to be used as a Boron source for plants.

How can Ulexite benefit your crops?

Ulexite is a very unique source of Boron for plants. Unlike other sources of Boron, it actually releases Boron very gradually upon uptake by plant roots. This allows Ulexite to function as a Boron source for a prolonged period of time.

In most crops, the difference between plant Boron deficiency and toxicity is very narrow. Hence, it is challenging to know when you’ve over-supplied Boron to your crops.

The natural slow-release feature is also important in preventing Boron toxicity. This happens when there is too much Boron released at once from fertilizers and poisons the crops. The slow-release process ensures that a regular amount of Boron is supplied to plants at a healthy level rather than over-dosing them. 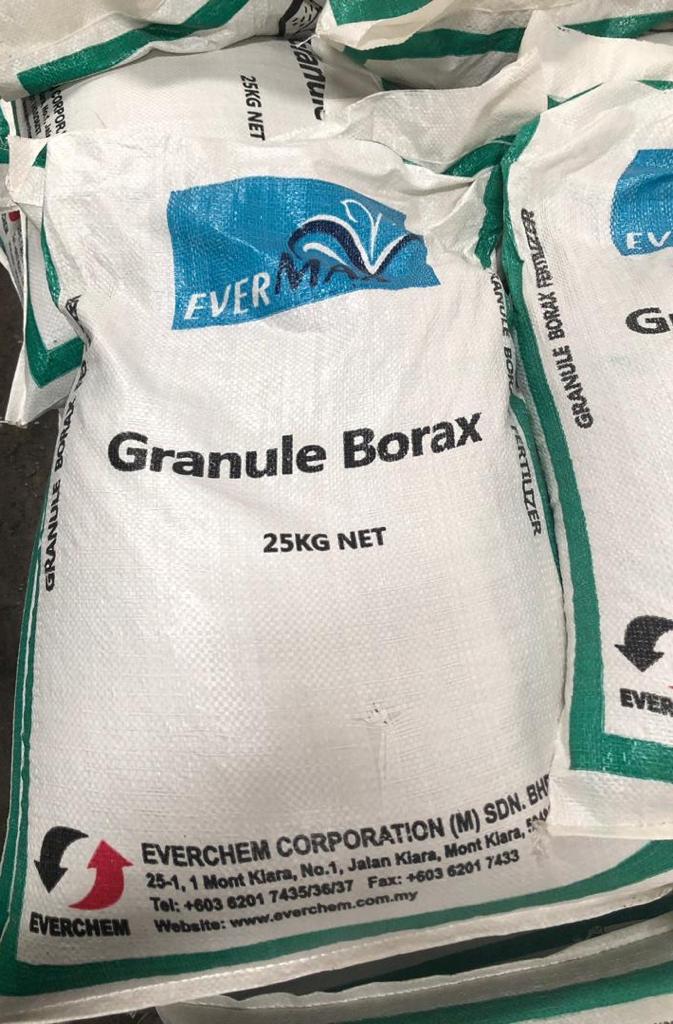 Ulexite is also considered to have a controlled solubility. This is very important in areas with a high amount of rainfall. In other sources of Boron with high solubility, Boron tends to leach into the soil and be washed away before it can be absorbed by the roots.

This tends to cause wastage and can pollute the environment. Ulexite does not pose any threat to the environment as it has very limited solubility in rainwater. It is, therefore, a very sustainable and environmentally friendly Boron fertilizer.

Ulexite has one of the highest Boron content and is very affordable per unit compared to many other types of Boron fertilizers. Everchem’s own Daebak Borate Fertilizer, which is Calcite Ulexite, has more than 45% Boron content which is considered premium grade Boron. 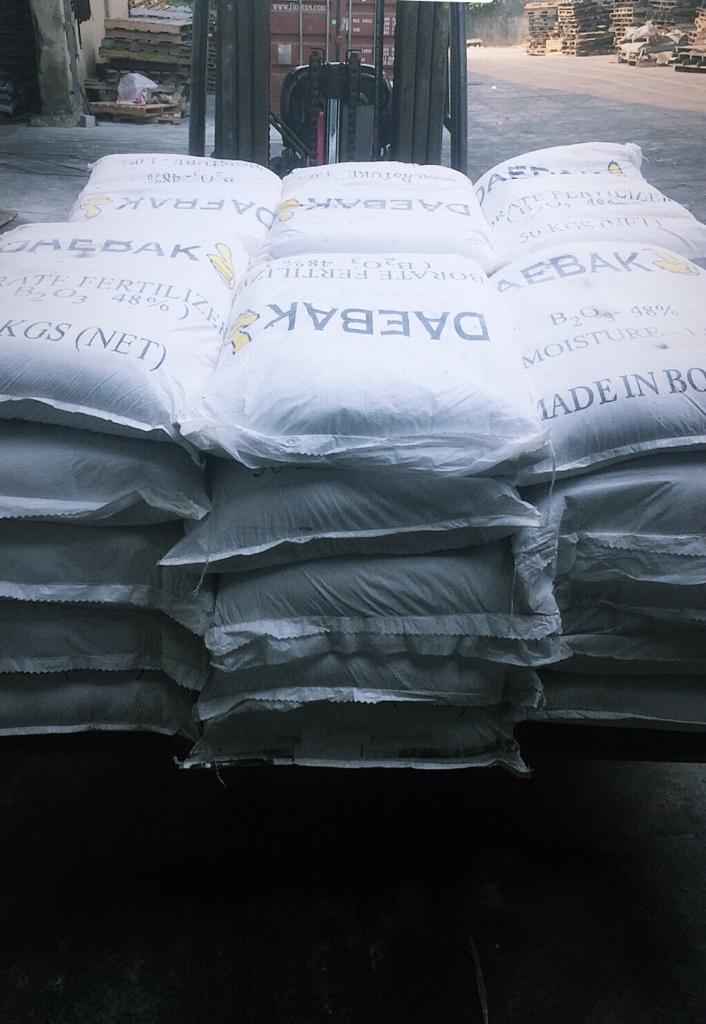 Make a difference in your plantation today by using Ulexite as your Boron fertilizer.